Michael and I have been sick all week.  It started last week when Kandace threw up Thursday night.  We kept her home Friday, then she seemed fine for the weekend but we got a call from the school Monday afternoon that she'd thrown up and to come get her.  Michael got the bug not long after that, but I've had a cold/flu symptoms off and on for a while.  I think my flu symptoms are associated with clogged ducts.  I've had some tenderness/redness, mostly on Monday.  I'm feeling better today thank goodness.
Winter is all the sudden upon us.  I'm already ready for spring again. :)  Stahle has been sleeping 7-8 hrs for over a week now.  Starting next Monday I can let her go 9-10 hrs.  Even with Stahle sleeping so well though, Michael and I are pretty tired, between other kids getting up and our days starting so early.  Michael gets up to shower at 6:30 and Stahle's first feeding is usually around there, except today she got up at 5:20ish.

Michael is in the last week of his 2nd rotation, GI which is internal medicine, involving colonosocpys and things like that.  Its been his favorite so far and he really likes the people he's working with.  He starts his 3rd one (psych) next Monday and he'll probably be in Powell buts its not for certain.
We had  parent teacher conferences last week.  Stetson's teacher told us he's off the charts in his reading but his behavior in class hasn't been awesome.  Last year his writing was really outstanding and its all Mrs. Paulson could talk about, and this year Mrs. Hecimovic said he's being a "minimalist" and just doing enough to get by.  He used to take so much more time with his writing and include lots of detail.  He's always been kind of impatient and very black and white in his school work, just doing the essentials I guess.  We like to think his behavior is a result of lots of changes at home with baby and everything.  We pray for him every night and ask for inspiration and guidance on how to parent him.  Parenting is definitely a marathon to me; endurance, lots of ups and downs, very little breaks, and never ending challenges.  He has really good days though.  Especially when he gets one on one time with me or Michael.  I love being with just him because there's no distractions and his true colors come out, but with 3 other kids, we don't get that luxury often.
Kandace's teacher is LDS and talked to us more about church related subjects than Kandace but she did say she doesn't have any academic concerns about Kandace and that she'll probably put her in an accelerated reading group shortly.  She also mentioned she has some naughty tendencies, occasionally trying to be sneaky and get away with things.  No surprise to us.

Stahle is an angel and I'm trying to soak every second in, knowing now more than ever how quickly time passes.  I don't wish time away or wish it would go faster or that she'd be older, because I know that in a blink she'll be 1 and I'll wonder where the time went.  After she eats, she sits in the corner of the couch and I talk to her and she smiles.  She will sit content like that for about 20 mins and its heaven.
Janelle is in the cutest phase in the world.  Every time she sees Stahle she really acts like its the first time and she kisses her and puts her cheek right next to Stahle's and says "Mmmm" like she just took a bite of something delicious.  Every time.  Janelle says the funniest things and has so much personality she makes us smile and laugh every day.

Whoever said going from 3 to 4 kids was the easiest transition waswas pretty much wrong.  Its been one of the hardest transitions for me.  The general hectic nature of our household is almost always overwhelming, feeling like I'll never catch up with housework or that Michael and I will never get to go on a date again just the 2 of us, or that we'll never get to sleep in again.
I like to think that once he graduates and we have an income and a house with more than 1400 square feet, that life will be easier, and it might be more convenient, but every phase of life will have challenges and I know I have to find joy in the journey and enjoy this phase we're in right now.
Posted by Emily Asay at 8:51 AM 3 comments: 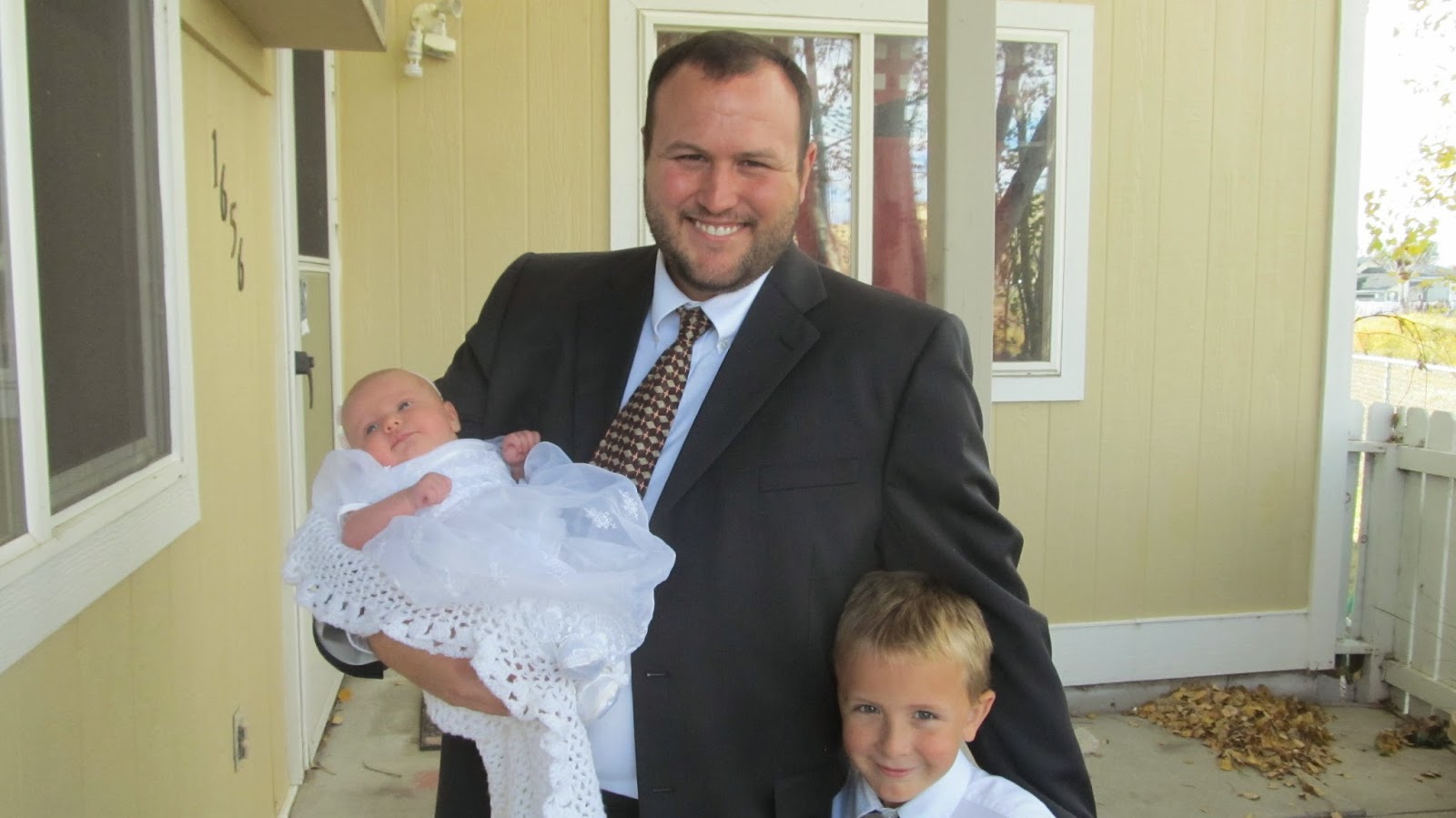 This was a super special day.  Always hectic and stressful (at least for this family) to get everyone ready and out the door and still love each other but we did it and even got some pics.  This is the same blessing dress that Kandace and Janelle wore.  Gma Asay bought it when Kandace was born.  It is a very special dress.  Michael and I got her dressed in our room at about 11:45ish (church started at 12:30).  I got emotional when I was buttoning her dress, it was just special to me and I thought about how I'd always remember this and how time flies and I told Michael before we know it we'll be helping her with her baptism dress, them her wedding dress and so on. 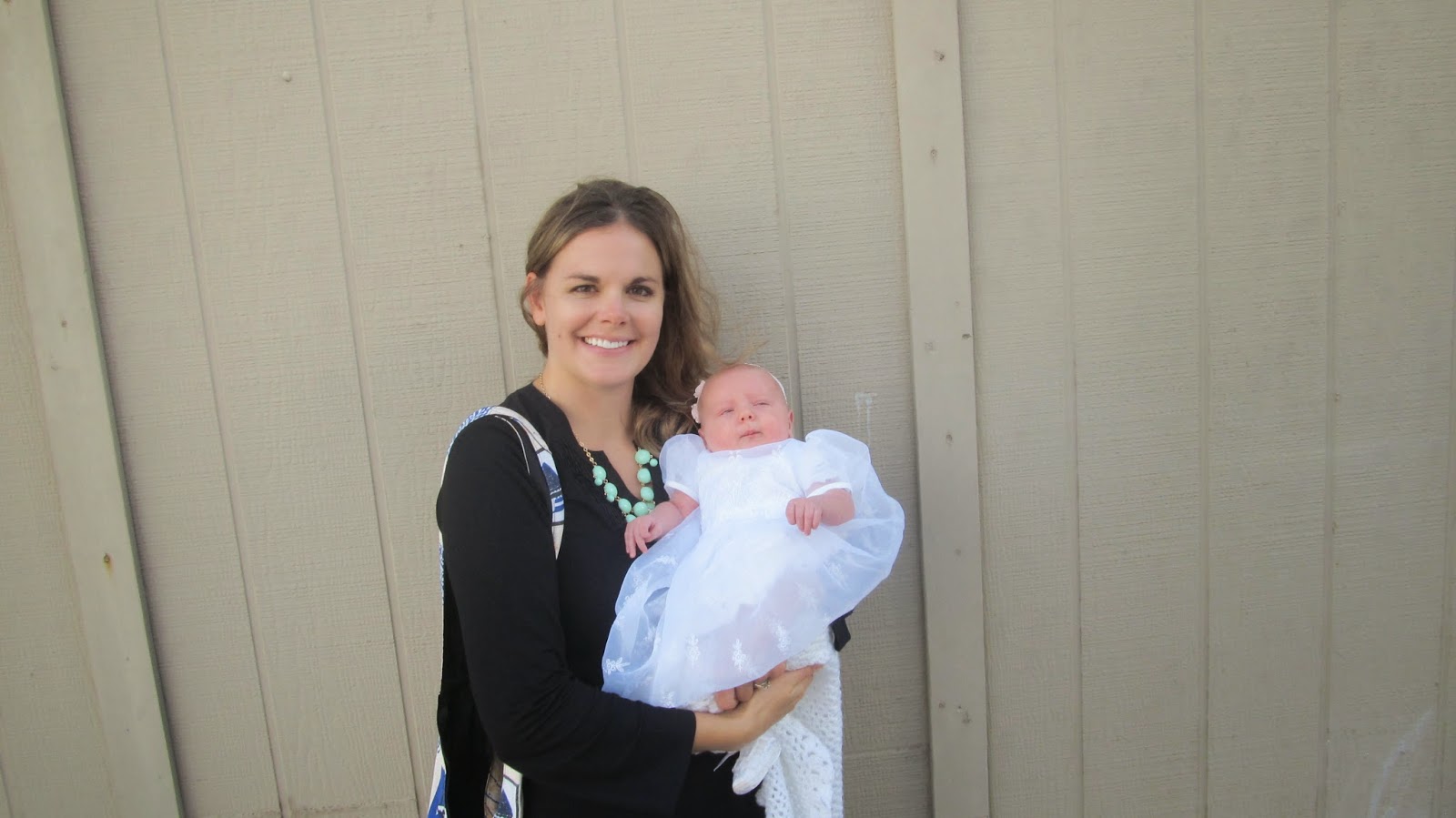 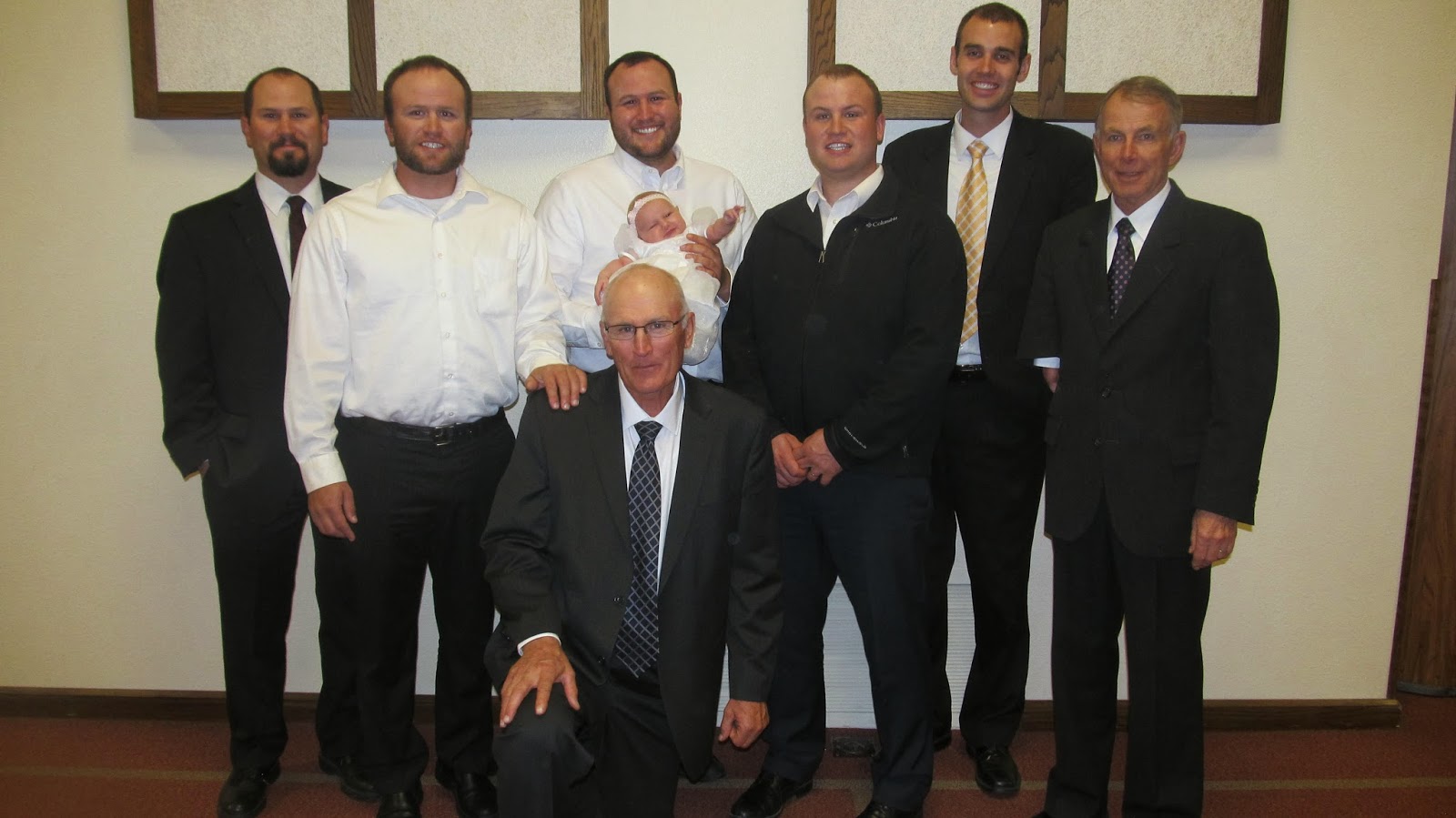 This was our awesome crew of priesthood holders that helped bless Stahe.  Todd and Charlie were there too but had left before the picture.  After the blessing we went to the Ave D. chapel for a luncheon.  We were so glad that those who could come, came and that we could celebrate our sweet baby. 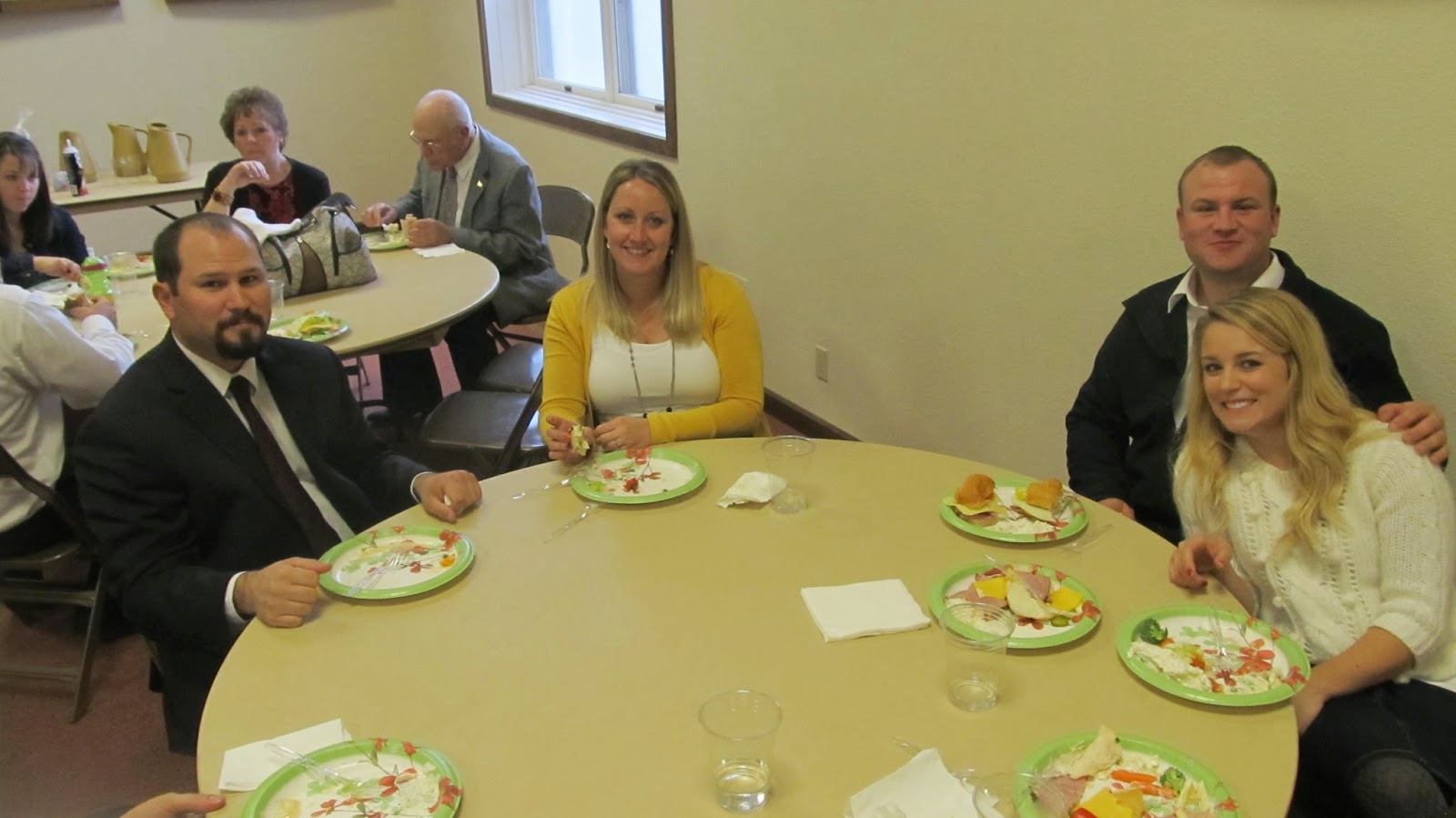 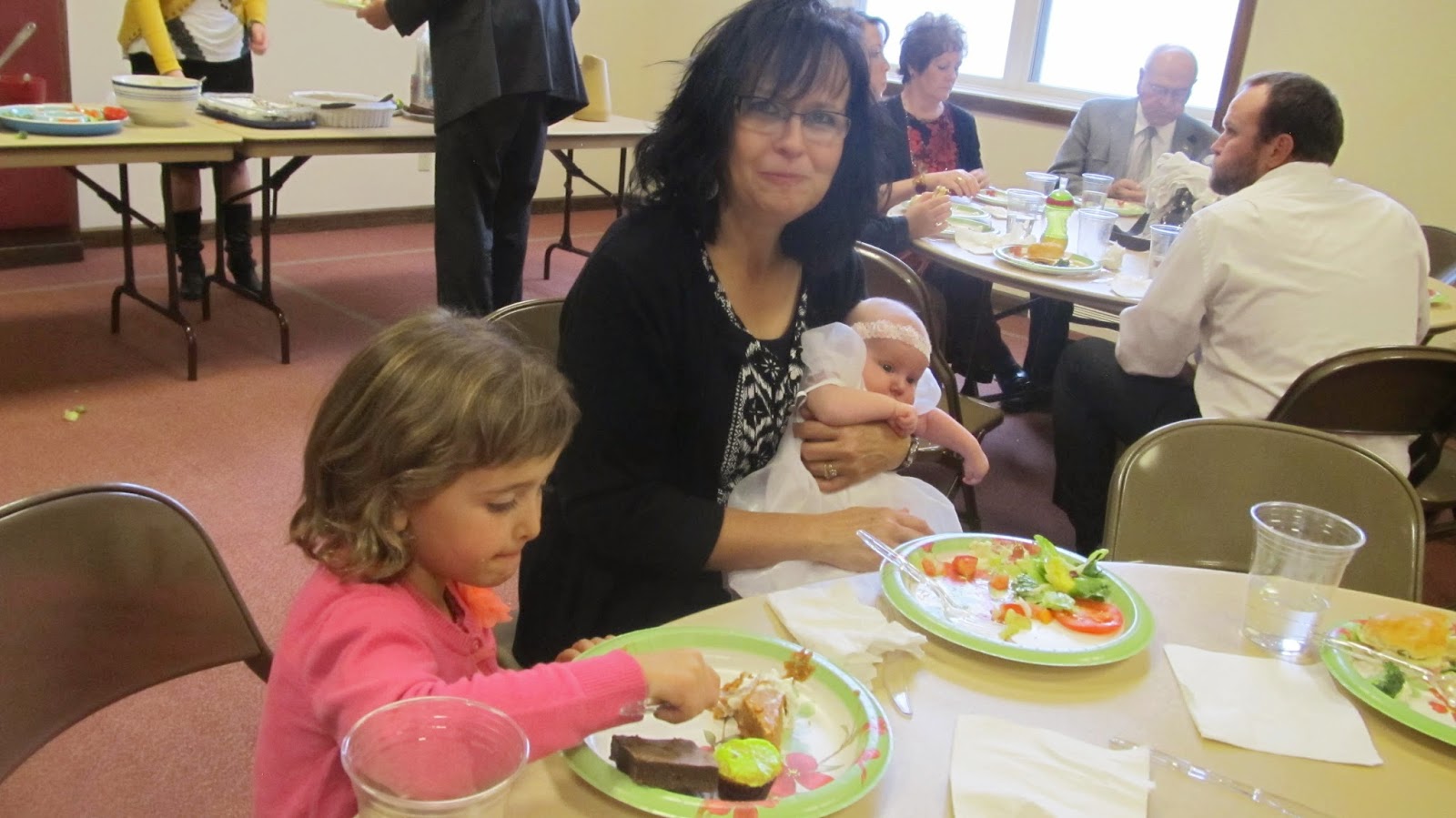 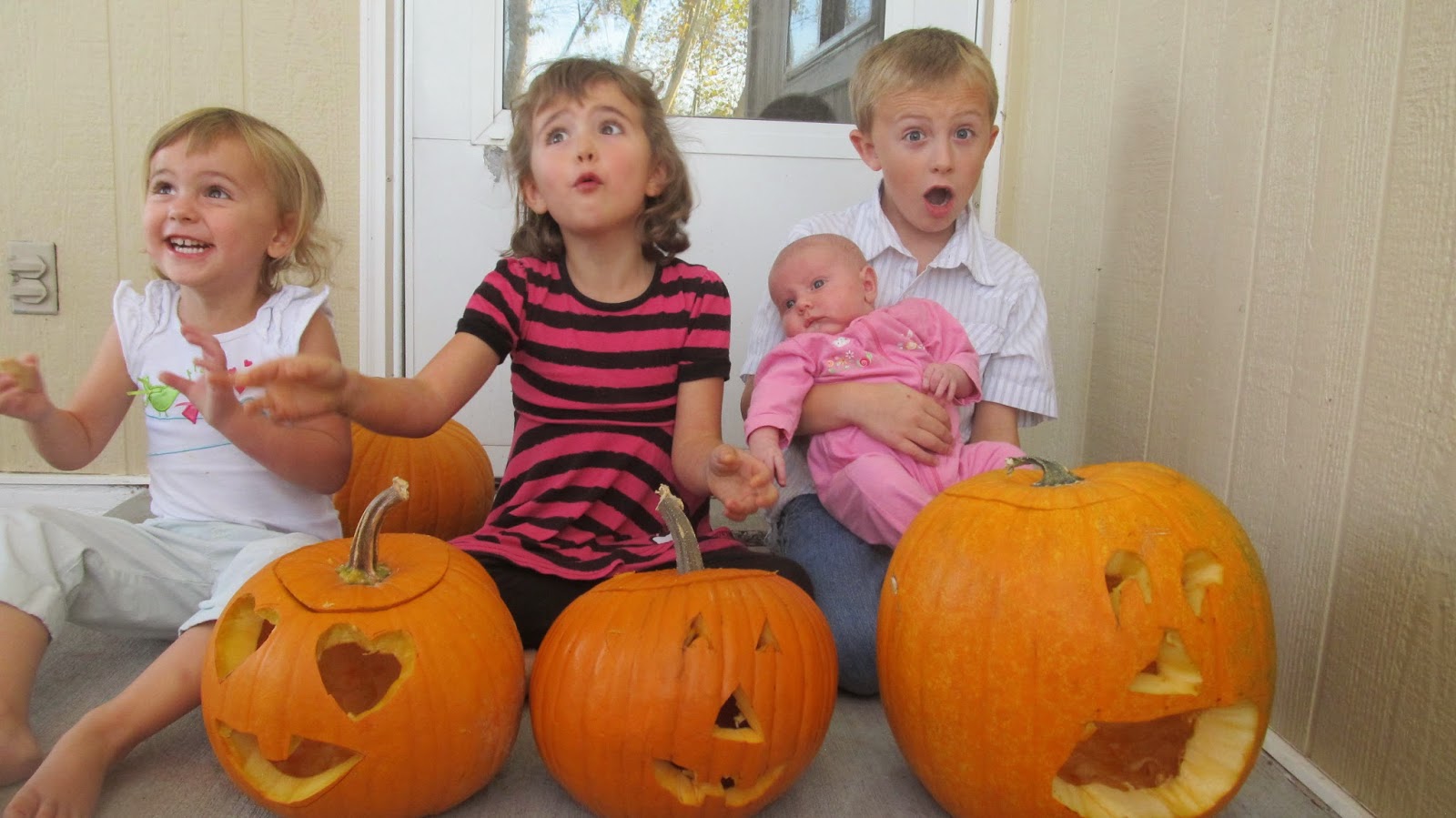 Thursday we carved pumpins.  Steston wanted no part in cleaning out the pumpkin but Michael talked him into it somehow.  The kids traced their designs and Michael and I carved. 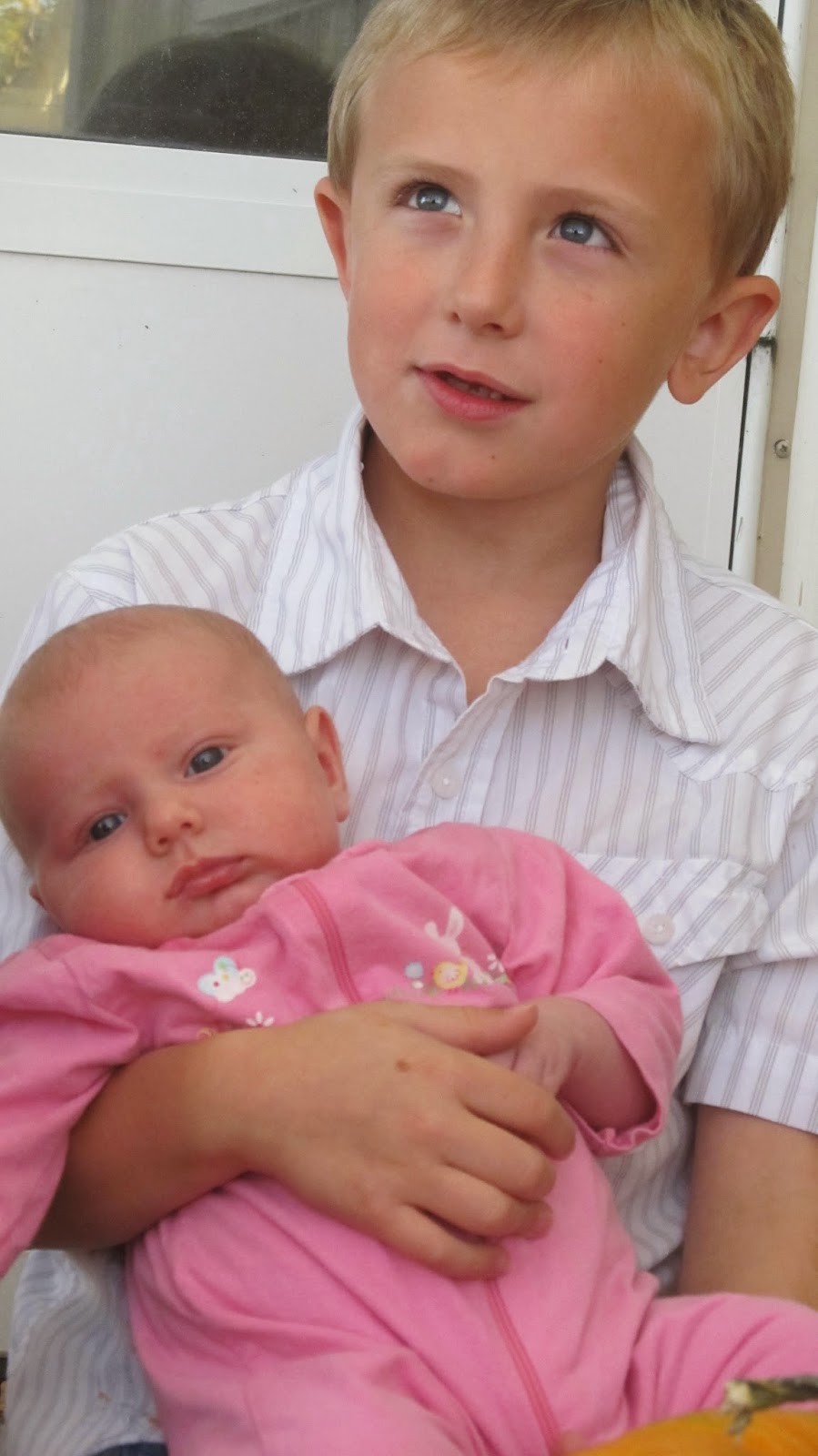 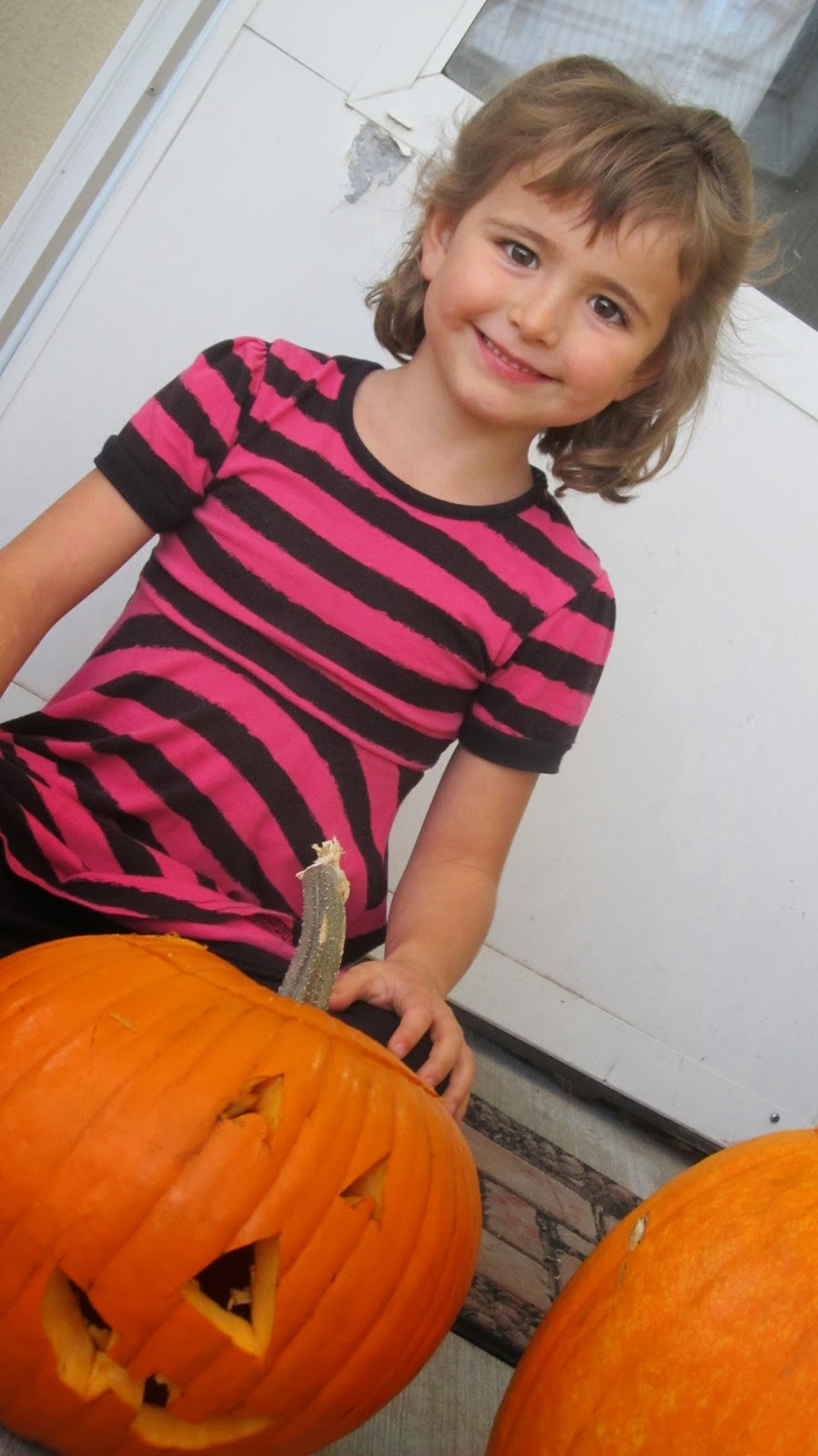 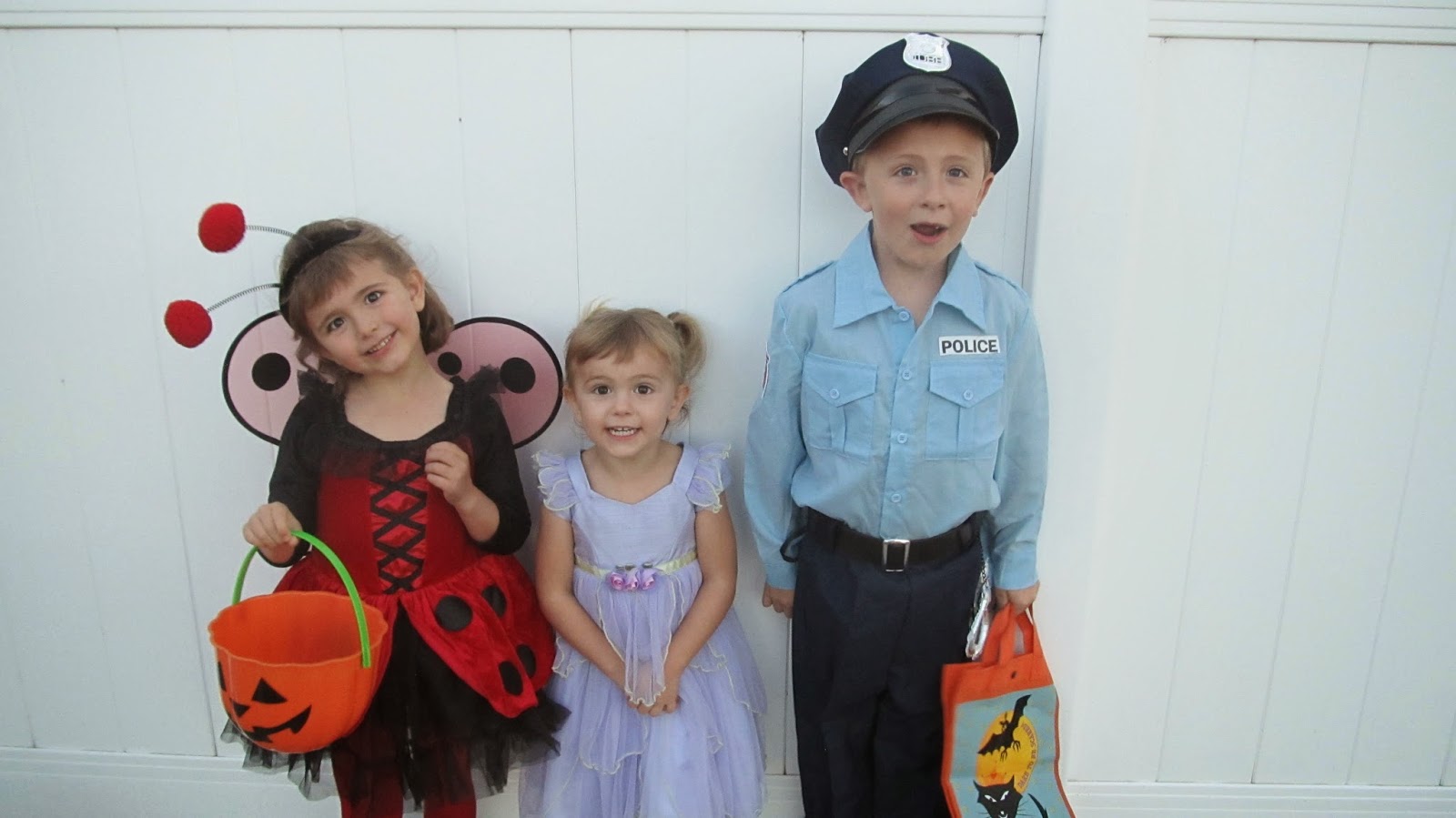 Halloween night we did the stake trunk or treat which the kids love.  I always buy way too much candy though and now we have extra candy that we bought and the kids' candy which makes a LOT of candy. 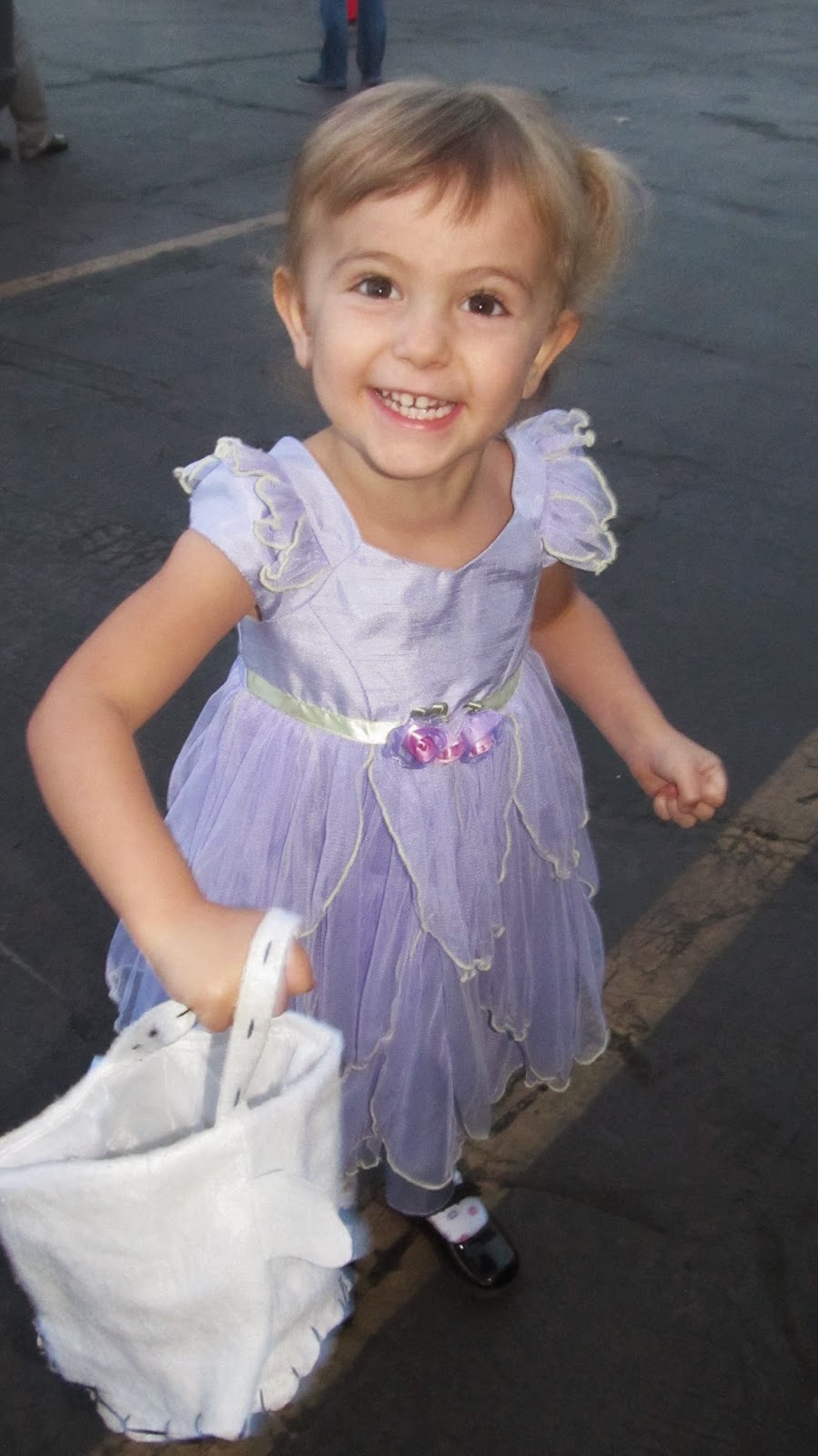 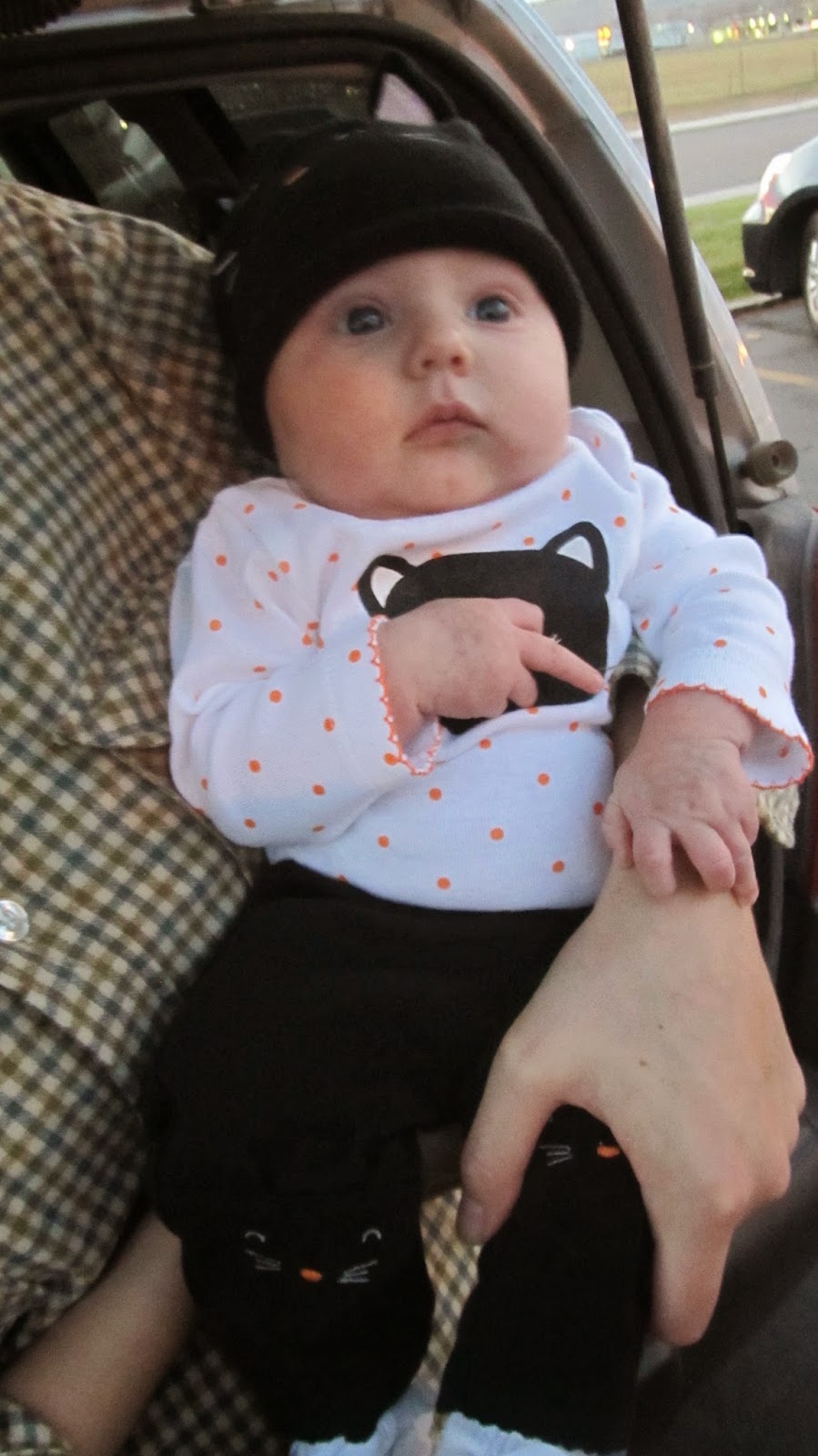 Stahle was the world's cutest cat.  Sarah Mills got us this before they moved to Utah. After the trunk or treat, Michael took Stahle home and I took the others trick or treating down a couple blocks over by their school.  This is something that I always love, even though Michael and I sometimes argue over who has to take them. :)  Janelle was the funnest to watch.  She thought it was pretty awesome that she could knock on someone's door and get candy from them.  There was one house with a haunted house in the garage with people dressed up giving candy.  Kandace, me and a reluctant Janelle went through (Kandace didn't bat an eye) and Stetson opted to wait for us outside the haunted house.  Holidays are sure special with little kids.
Posted by Emily Asay at 10:05 AM 1 comment: 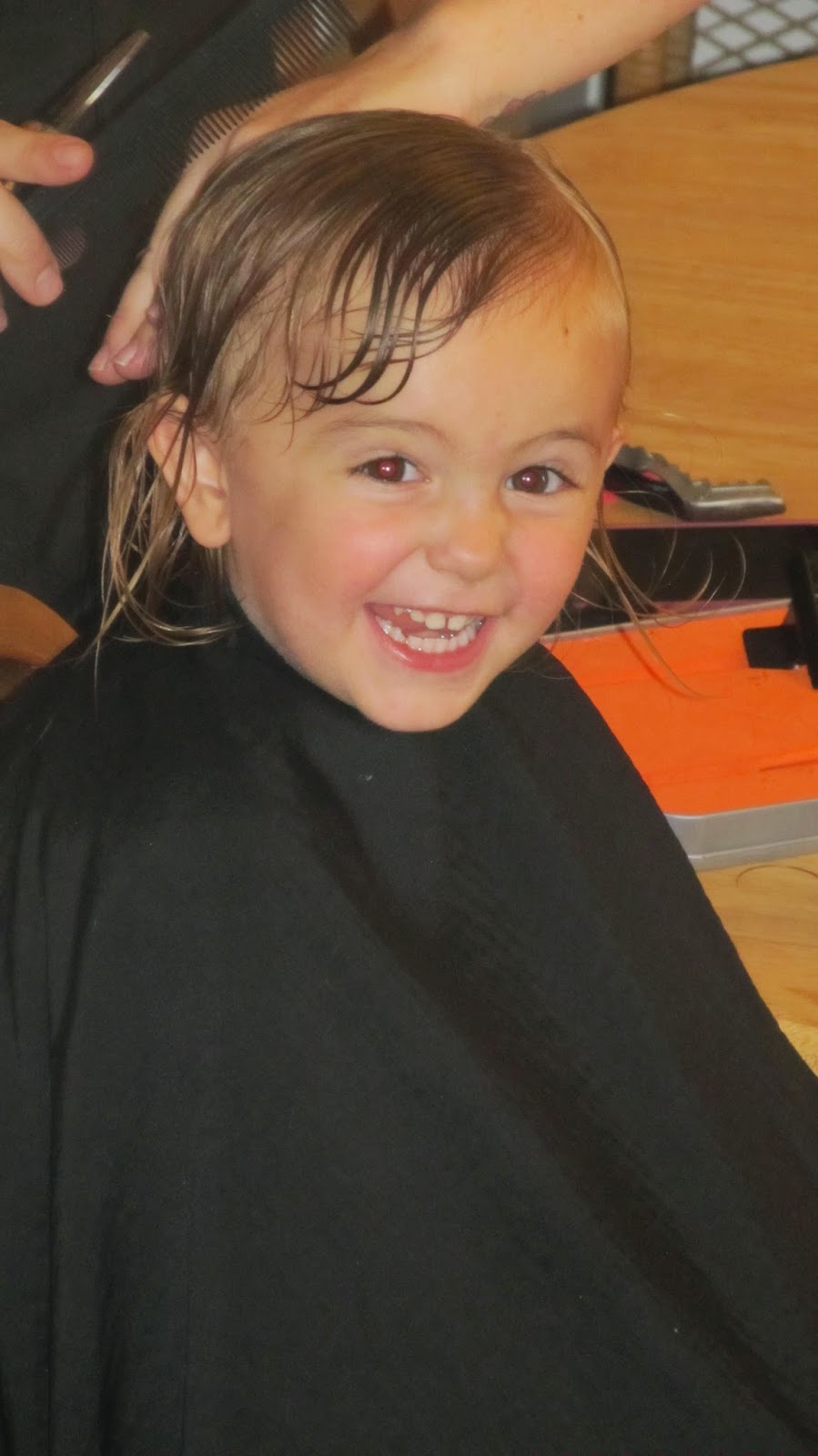 This girl loves haircuts!  Our friend Alicia came over the other day to give the girls some much needed trims. 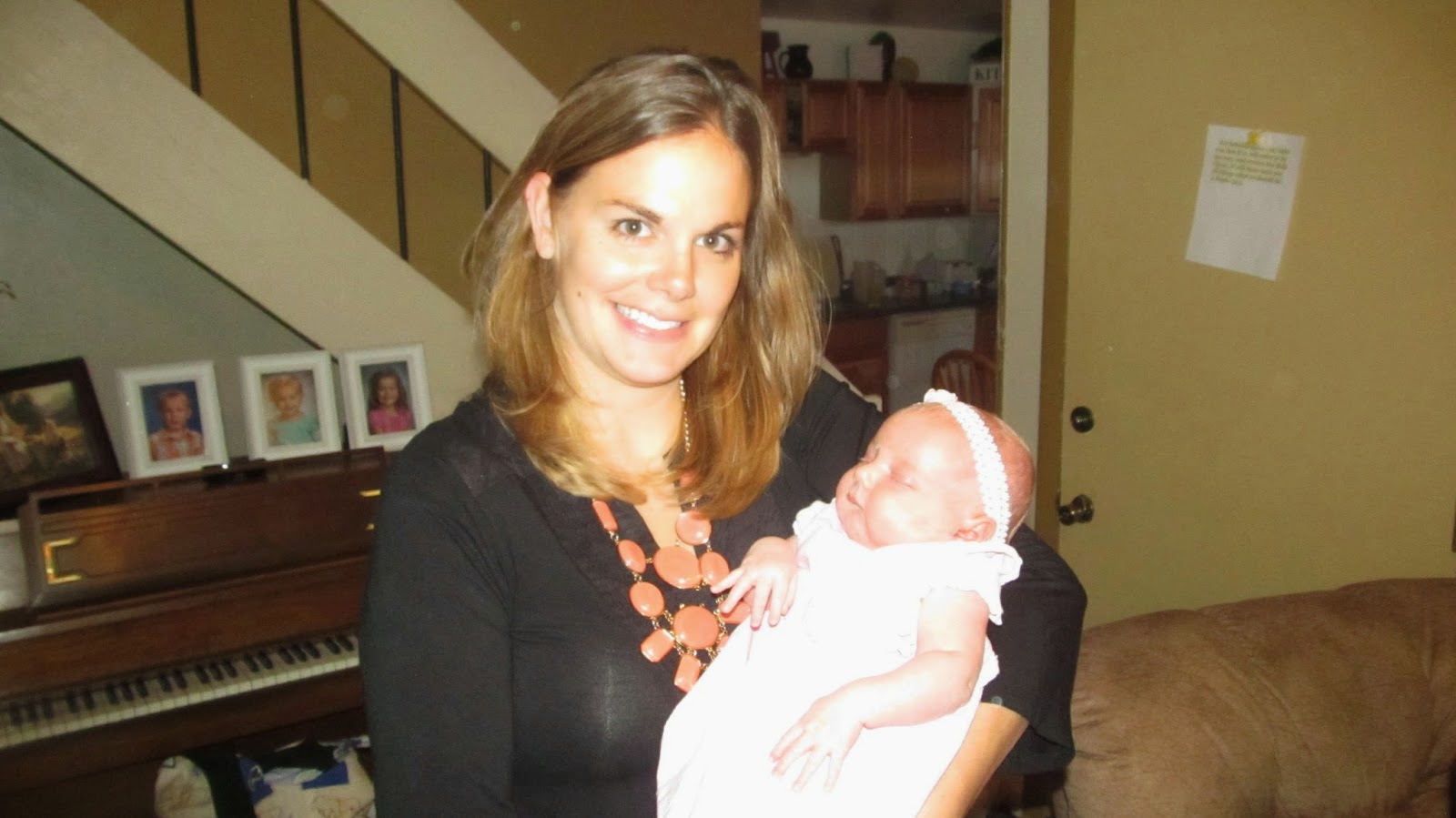 I can't not take a picture of my Stahle every Sunday before we go to church because she just looks so cute all dressed up.  This isn't a great pic of her dress cut its one that Bruce & Diane got Kandace that all 3 of our girls have worn. 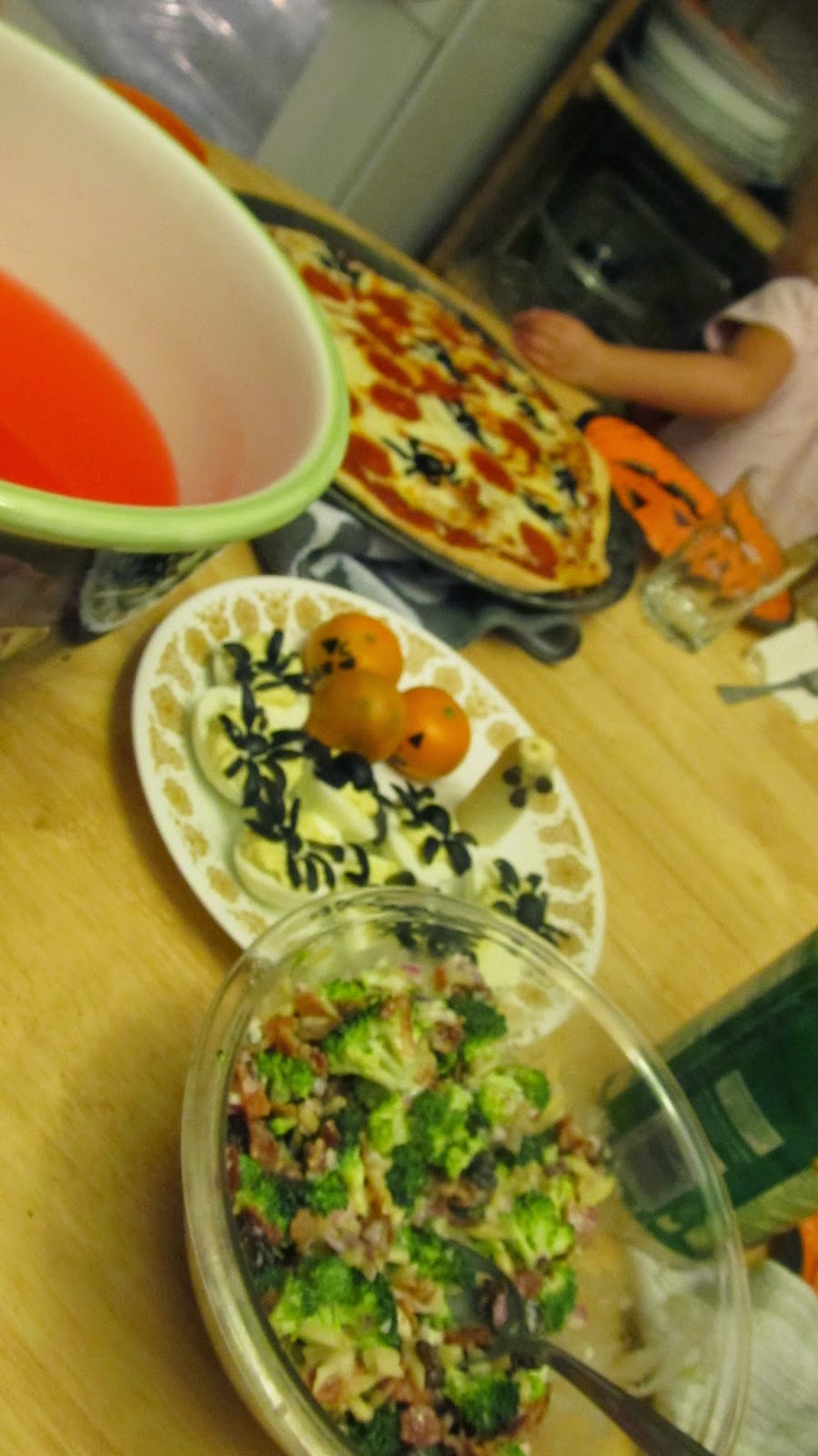 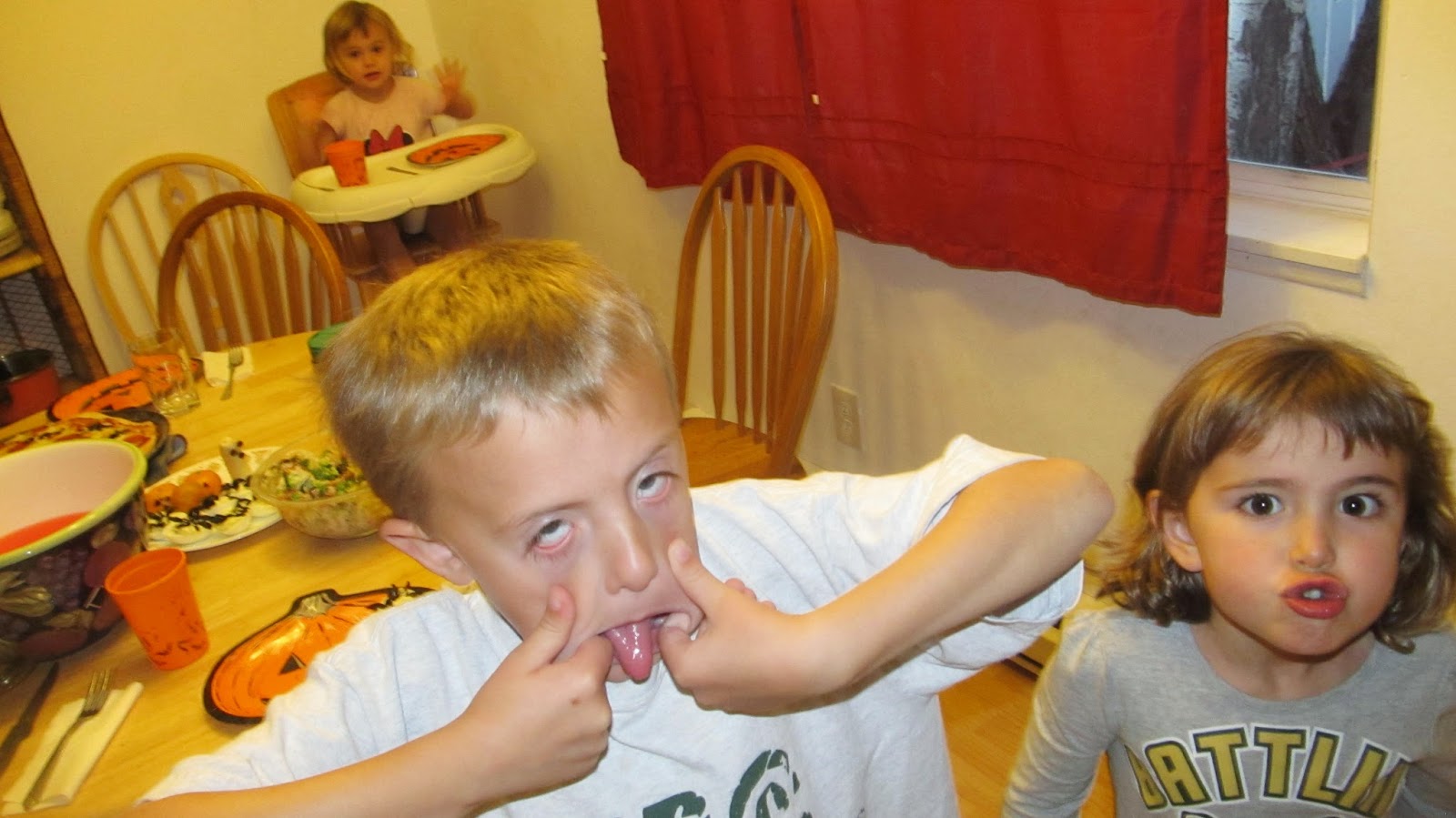 spooky faces from the kids
We're all just chuggin along. Stahle's blessing is this Sunday.  I've been stressed about getting that all worked out.  Stahle has been such a good baby though.  She can go 7 or 8 hrs now, which sounds like a dream, and it is, but I'm still exhausted.  Last night she went down at about 10 and then I woke her up at about 5 to feed her.  The night before she went down about 9:30 and I got her up right before 5 but its hard for me to fall back asleep so my days start pretty early but I wouldn't have it any other way.  Stahle is worth ALL of it.  Today I had my 2nd appt with my physical therapist.  I have more exercises and am anxious for continued improvement.  She said no exercise though until my pelvic floor muscles are stronger, which is a steady and slow process.  Its been hard not being able to go to the Y.  Sari (my PT) said even spinning and swimming are prohibited right now because they work the core which presses down on my uterus.