The day we flew a kite 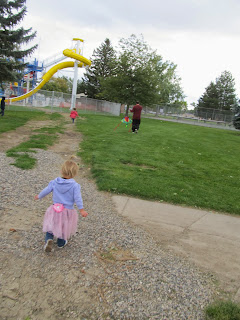 Tonight Michael suggested we go fly a kite!  The weather was a little chilly but the wind was perfect for kite flying.  Felt so good to take a break from the normal routine and do something different. The kids L-O-V-E-D it.  The grassy field we used was perfect.  Its right by our condo and its where Stetson has flag football practice every Tuesday evening. 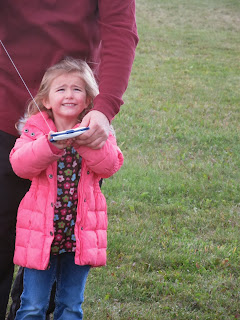 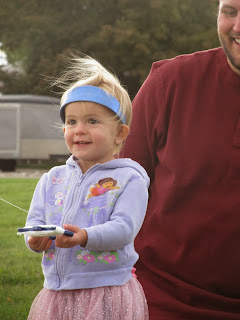 There are a million things I could say about this picture.  I will start by saying that I did not dress Janelle this way but we just sorta let her do her own thing.  The blue headband is from Kandace's Cinderella costume last year and Janelle thinks its "her hat."  In her words though it sounds like "mah hat."  Don't try to take it from her or you're in for it.  Kandace is starting to share all her great fashion advice with Janelle, including the wonderful world of "tu tus."  Janelle actually says "Tu to" really well.  And always says "mah tu tu."  Mah stands for "My" of course.  Michael said today that when he tells stories about Janelle at school they "fall out of their seat laughing."  I didn't think she was that funny..maybe Michael is just a really good story teller. :) 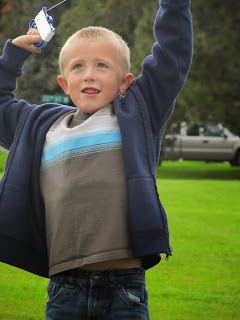 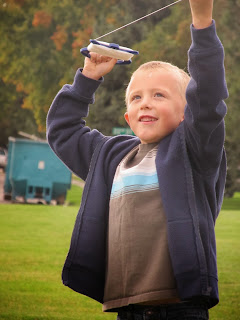 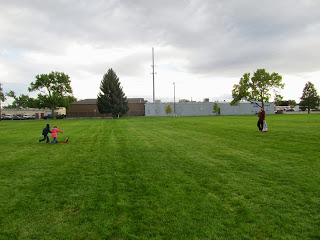 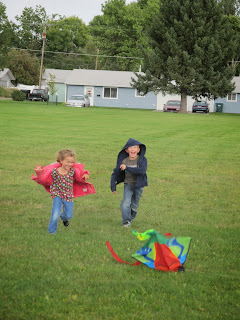 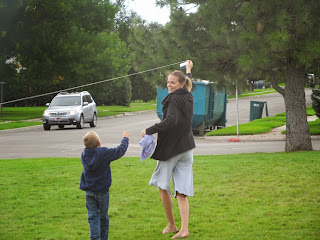 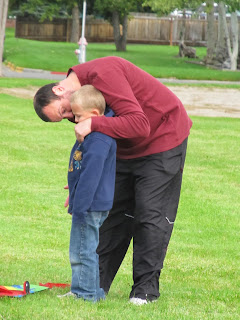 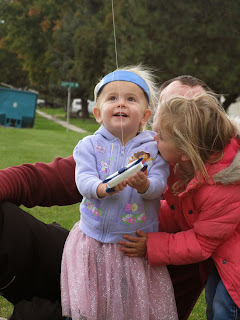 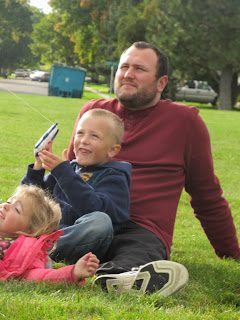 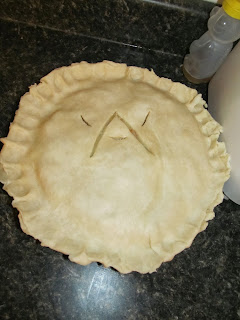 Michael made chicken pot pie for dinner last week.  Yum-o.  And what good would any pastry be without the flying A?
Posted by Emily Asay at 4:49 PM No comments: 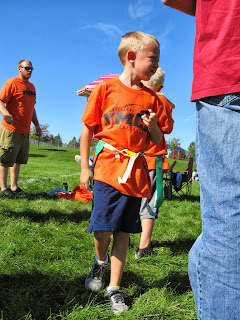 A couple weeks ago Stetson man started flag football.  I just asked Michael what I should say about this post and he said to say " Stetson has just started to play flag football and he's just getting the hang of it."   We love Stetson to the moon and back but so far in his young life, sports is not his strong point.  In his defense, some of these kids are on their 2nd or 3rd year of flag football since they start everyone a lot younger here in the big city.  One thing I can boast about is the fact that Stetson's attitude has improved by leaps and bounds.  Stetson's teacher (bless her heart) started a sticker chart as an incentive for good behavior and its appearing to be a huge help.  Michael has been working with Stetson on understanding the actual game of football, even drawing out some pretty impressive diagrams.  We're trying to help him understand the "bigger picture" and not just blocking, which he DOES have down pat. :)  He's never really where the action is, just kinda runs around in the same general direction as the rest of the players.  Just another month and he can start basketball camp!  (Don't tell Michael) 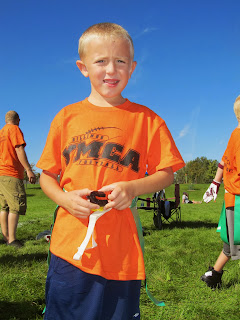 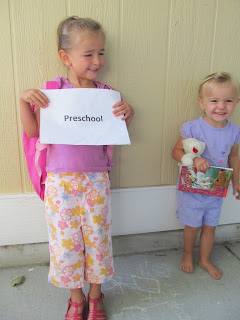 Kandace's 1st day of preschool was a couple days ago and she was more than ready.  She went to a year of the 3 yr old class at CRC in Lovell last year so she's very familiar with the whole process.  We'd gone to Stetson's back to school night just a couple nights previous and when she saw that Stetson had his own desk she thought she would also have her own desk and was looking for one with her name on it when she went inside her classroom.  I am over the moon about the YMCA.  Not just because we got Kandace enrolled with a reasonable tuition, but because of all it offers us as a family.  I drop Kandace off every MWF at 8:30, drop Janelle off at the childwatch down the hall, go to bootcamp at 9 and then I might take Janelle swimming like we did yesterday or go to the library or do another class.  We try to stay downtown until pickup time (11:30) so we're not driving back and forth so much.  On Wednesdays, Kandace's class goes to "Rock tumble and roll" which is gymnastics with a zipline, little tramps, balls, etc.  Her gymnastics class is right under the track and so when I'm doing my laps for bootcamp I can actually wave to her and watch her having fun.  I love that.  On Fridays she gets to take swimming lessons and I think that is so awesome! Kandace loves swimming and I'm excited for her to get better and more independent in the water. 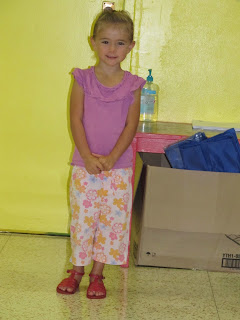 waiting for preschool to start 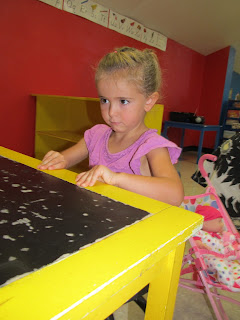 Other than Kandace starting preschool, Michael's been working hard at school and doing very well. We've been practicing "Histories" which is the conversation you have with your provider when you first go to a clinic to be seen for something that starts with questions like.."so what brings you in today?"  And a series of other questions so I get to be Michael's "patient."  We went to our 2nd Billings Mustangs game with a bunch of Michael's PA buddies and their wives/fiances/girlfriends and we were the only ones with kids so we definitely livened things up.  Last weekend we went home for Adam's baptism and then to Asays to say hi and we came home with some tomatoes and other delicious produce from their garden.  We canned 4 qts and 1 pint of tomatoes this morning.  A while back we got some peaches from Shannon in the heights and canned 14 qts and froze several bags.  Last week we got a crate of sweet corn from bountiful baskets and froze all that.  SO YUM.  I remember the first time I froze corn I was 7ish mos prego with Stetson and me, Jan & Mildred blanched and froze corn in Mildred's garage.  I felt like such a rookie with those domestic women who'd been gardening and canning deliciousness for generations.  It was the best corn I'd ever had.
Stetson started flag football last Tuesday.  He seems excited about it but we'll just say he has room for improvement.
Posted by Emily Asay at 1:01 PM 3 comments: