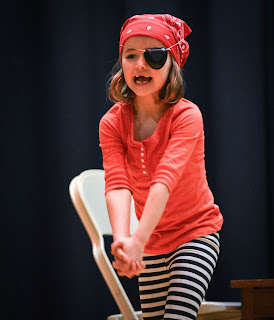 Last night right before bed, Kandace asked me how you bear a testimony and what a testimony is.  After we talked about it for a little bit, I asked her if she'd ever felt the spirit, and she talked about when she lost her ballet slippers in Lovell like 4 years ago and how I'd suggested we pray to find them and we prayed 3 times and finally found them.  I always suggest to my kids that they pray when they lose something because I believe in the power of prayer and want them to gain a testimony of it and have these special experiences to remember and look back on.  Kandace told me last night that she wanted to share that story and bear her testimony in fast Sunday Sacrament the next day.  She asked a couple times when it was her turn, I said just go whenever you're ready, but the part i hadn't anticipated was she wanted me to go up with her!  So up we went, I hoped that she'd just do it if I sat in the seat behind her by the bishopric, but she didn't want to stand there alone, so I kind of crouched behind her while she said it and my heart could have burst as I listened to hear tell the story.  She is brave and I'm grateful she shared her testimony that day.
Posted by Emily Asay at 12:41 PM 1 comment: 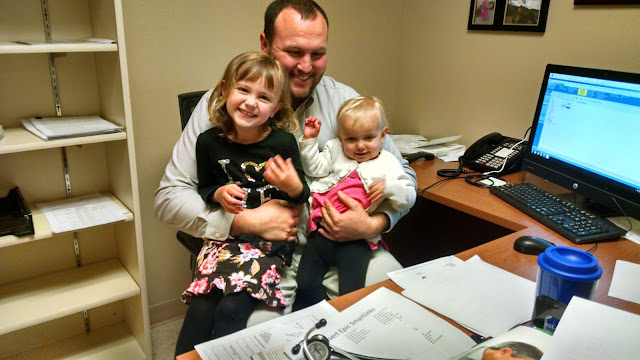 Having lunch with Michael is one of my favorite things in life.  Ha.  I'm easy to please.  This day we just ate at Subway which is in the same bldg Michael works at.
Posted by Emily Asay at 12:40 PM 1 comment: 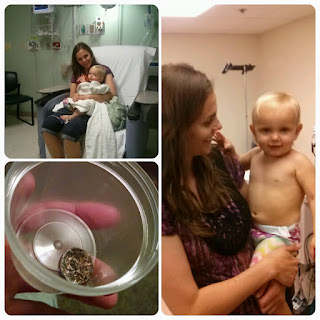 On Thursday, April 21, Stahle was in the living room and I was in the kitchen and Stetson said she swallowed a penny. I'd heard a little cough and then a cry.  Michael and I didn't think too much of it, hoping/assuming it would just pass.  That night she didn't eat her dinner very well.  She'd throw it up after a small bite, but she did eat some other things, like an orange without trouble.  Michael said if she kept throwing up we'd better get her x-rayed.  The next morning she ate a sweedish pancake pretty good, took a nap and when she woke up and I tried to give her lunch, she threw it up so we figured we'd better take her to the St. V walk-in on Broadwater, which is where Michael works a couple Saturdays a month.  The x-ray showed that there indeed was a penny stuck in her little esophagus and that we'd need to take her to the ER.  Ugghh.  Not what we were hoping for.  We waited in the ER for about 3 hours, first waiting for the regular MD, then after he said we'd need an ear, nose throat doctor, we had to wait about 45 minutes for him.  He said its pretty routine, and that the whole procedure itself takes about 10 minutes, not including prep and recovery.  The doctor had us guess the year of the penny, but it was so tarnished from the acid in her esophagus we couldn't tell.  So at around 8pm, we went and saw her in recovery and brought her home around 9, which was a huge relief, I thought we'd be there all night.
Luckily, dad was in Billings that day so he came and got the kids from the ER and took them home with him.
Experiences like these are so scary!  It just makes everything in life seem fragile and unpredictable, when you've been kind of coasting along with no major setbacks as far as your kids' health goes.  I am certainly grateful she's ok and that we have modern medicine.
Posted by Emily Asay at 12:39 PM 1 comment: